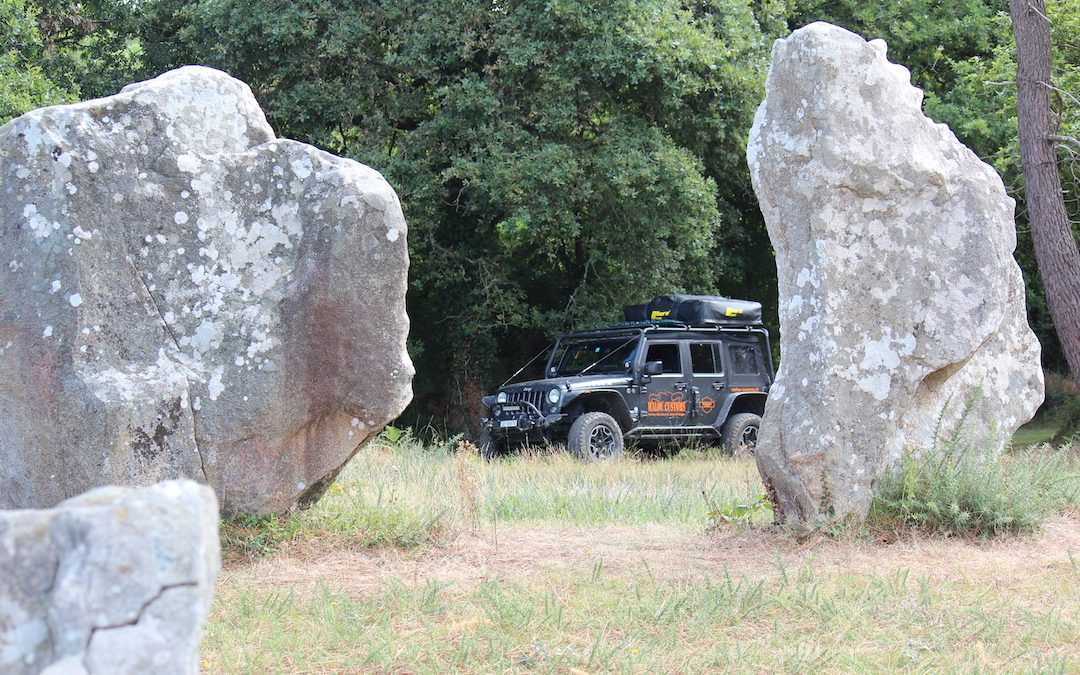 Brittany in Northern France is not only well known for its rough coastal landscapes, but also for its stone monuments. All across the landscape you can find dolmens, menhirs, alignments, stone circles and cromlechs. So we set out in search of the more and less famous dolmens and menhirs (standing stones) of Brittany. Therefore we leave the coasts of Normandy and Brittany to go up country, direction south. Along our path, we halt in Huelgoat to discover the fairytale landscape of its surrounding forest.

The Legendary Fairytale Forest of Huelgoat

Huelgoat is a town in the middle of eastern Brittany, surrounded by dense forests. As almost every town in Brittany, also the town sign of Huelgoat is additionally labeled with the old breton name “An Uhelgoad” meaning High Forest.

In order to start our hiking tour through the forest of Huelgoat, we park our rig on the Parking de l’Arquellen. A path along the stream Clair Ruisseau takes us to the first attraction, the Mare aux Sangliers. It’s a little pool in the stream, surrounded by huge rocks. Not only does it serve for boars as its name suggests, but it also seems to be a welcome refreshment for our dogs. After that we cross a small wooden bridge over the stream and hike up a steep hill and soon we find ourselves back on the main path.

Standing Stones (Menhirs) and the Cave of Artus

The legendary forest of Huelgoat certainly offers numerous hiking and walking trails in a seemingly untouched landscape. Intense green ferns line the paths. Not only the mosscovered trees and rocks let us believe there’s mythical creatures hidden everywhere, but also the uniquely shaped rocks and standing stones make perfect sceneries for legends and tales. One of those locations is for example Arthur’s Cave (Grotte d’Artus). According to the tales, King Arthur lay here on the highly perched bed, protected by the creatures of the forest.

While we hike on the Chemin des Amoureuses (Path of Lovers) towards Arthur’s Camp, we meet only a few other visitors. After a walk of about half an hour, we spot huge, geometrical rocks in the distance. Small paths run between massive, around five meters high granite rocks. According to legends, King Arthur had his field camp here and hid a hoard of treasure on this very spot. Other than the legends, history tells us that there have been archeological excavations under the lead of Mortimer Wheeler in 1938. These excavations revealed a celtic oppidum and remains of houses. It doesn’t matter if it was actually the Celts or King Arthur who resided here, this location is a magical place and worth a visit.

In contrast to the rough coastal area in the North, the forest of Huelgoat fascinates us with its fairytale-like landscapes. The town of Huelgoat has also much to offer, even though we’ve been there only to get our ration of baguettes. For example you can visit la Roche Tremblante, a rock that weighs about 100 tons, and try to let it tremble using just one finger. Furthermore there’s the Moulin du Chaos, a chaos of rocks besides an old mill. And last but not least if you dare, you can climb down to the Grotte du Diable (Devil’s Cave).

The Megalithic Culture of Brittany

After we’ve seen all those impressive rocks and rock formations, we are even more inspired to learn more about the megalithic culture of Brittany. For this reason, we leave the fairytale forest of Huelgoat and drive towards the Southern coast of Brittany. There we want to explore the megalithic culture that goes back around 7000 years, such as dolmens, menhirs and stone alignments.

Definition of Megaliths and Menhirs

In short, Megaliths are big, undressed rocks, mostly ligned up for burial sites or cult complexes. They can either stand in groups (for example as stone alignments, stone circles or in a square form = Quadrilatère), or as solitary menhirs (standing stones). Some of you might certainly know the menhirs from Asterix Comics.

Dolmens are mostly made of upright megaliths, covered with a gigantic flagstone, as you can see in the following pictures. Originally the dolmens were covered with soil and stones. Later in history, people started to remove the dirt and stones in order to use it for building houses.

During our travel through Brittany there’s always road signs that lead to dolmens and menhirs. Some are more famous like the Dolmen of Crucuno, others are more hidden, but therefore they are less touristic. So this gives us the chance to visit those fascinating places without any rush and mostly without other people around. Actually you can visit most of the menhirs and dolmens freely, no fences and no entry fees.

Dolmen of Crucuno and Mané Groh

The Dolmen of Crucuno stands in the middle of a small viller in the municipality of Plouharnel. Right next to it villagers built a house and therefore the entry corridor, once 24 meters long, was removed. Because of that, there’s only the tomb chamber left. This chamber is nevertheless pretty spectacular for its huge ceiling plate with a weight of about 40 tons. This gigantic plate lies on 9 remaining megaliths.

Around 800 meters further up north of Crucuno lies the no less impressive Dolmen of Mané Groh (Breton “Mané Croc’h”). Hidden in a small forest, this dolmen has something very special to offer. In fact, this megalithic tomb has four chambers, each one of them served as a tomb. A six meter long corridor leads to the symmetrical chambers to the left and right side.

Just like the dolmens and menhirs, cromlechs are also a part of the megalithic culture of Brittany. Cromlech is the definition of stone monuments composed of a varying number of megaliths. For example stone circles, the so called Quadrilatères (rectangular formation) and alignments. Just a little further away from Crucuno and well hidden lies the Quadrilatère of Crucuno. This cromlech is a rectangle of 35 x 25 meters and contains the remaining number of 22 menhirs. According to current knowledge, it served as a cultic site.

The Alignments of Carnac

In the southeast of Plouharnel lies the town of Carnac. In terms of it’s surface area, it’s probably the most impressive alignment of Brittany. The carnac stones (Breton: “Steudadoù Karnag”) lign up in regular rows on a total lenght of around 4 kilometres (2.5 miles). The three largest fields of menhirs are thus Ménec, Kermario and Kerlescan, combined they count up to 3000 stones. Especially one of those menhirs, the Giant of Manio, stands out with it’s height of 6 meters (9.68 feet). These megalithic fields were arranged around 7000 years ago and once again probably served as cultic sites.

Except for the alignments of Carnac, all the megalithic sites are freely accessible with no entry fees. The stones of Carnac are surrounded with stone walls, but they can be well observed from the outside. In order to see them up-close, you’ll have to book an official tour.