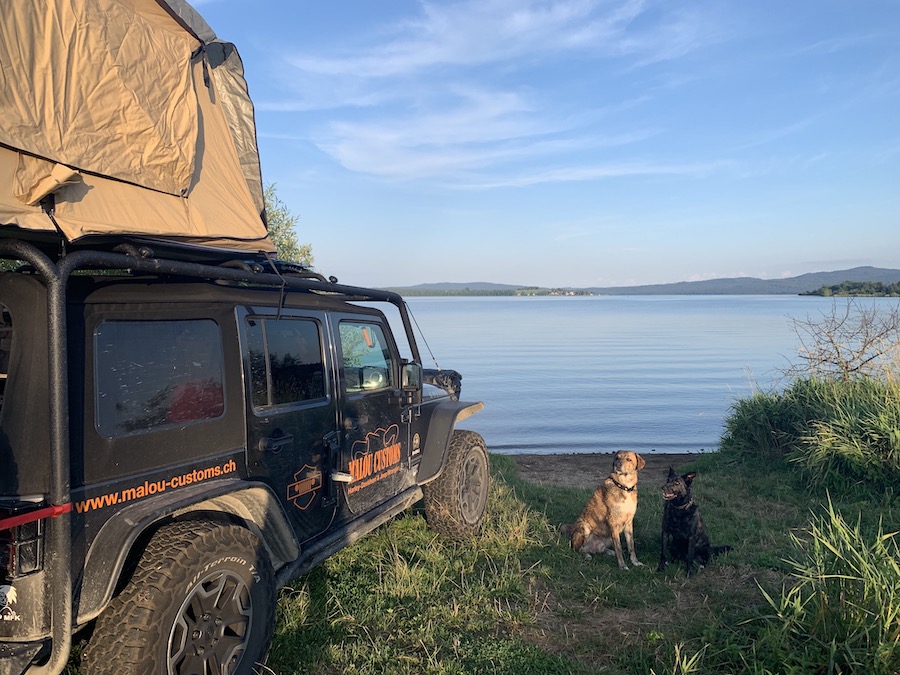 The first of August is a national holiday in Switzerland. One of the traditions on this day, is that people love to set off fireworks. As far as the noise goes, this day resembles more a war than a festive day. We want to spare our dogs and ourselves the annoyance of this unnecessary noise, so we leave the country for an extended weekend.

This time, we want to explore eastern Europe, overlanding through southern Bohemia in the Czech Republic. There are some quiet places to explore and we are longing for some new adventures.

In Austria we drive through the Bohemian Forest to the Lipno Reservoir. With a surface area of around 4650 hectares its the biggest lake of the Czech Republic. The lake is surrounded by several national parks.

As we know for sure that wild camping is forbidden in national parks, we look at about four different maps, to make sure we don’t camp in a forbidden area. Except the wild camping part itself of course. That’s forbidden anyway. So we find the best camping spot ever. We are so excited having found this place right at the lake. The dogs run around, chasing each other, splashing around in the water. We install the roof top tent and start cooking a fine dinner. Everything seems to be just perfect…

Bohemian Rangers in the National Park

… and there come the Rangers… A conversation in Czech:
Bad Ranger: “What do you think you’re doing here?”
Lucie:” Camping.”
Bad Ranger: “You’re not allowed to do that here.”
Lucie: “Why not?”
Good Ranger: “Nice Jeep.”
Bad Ranger: “It’s a National Park.”
Lucie: “We looked it up in several maps and this place wasn’t declared as National Park in any of those.”
Bad Ranger: “From there to there (he swings around with his arms and points direction Italy, Ukraine, Scandinavia, France), that’s all National Park. You know that can cost you a penalty of up to 5000 Euros.” (around 5500 Dollars)
Lucie: “But in the Czech Republic you still pay with Czech Koruna, so maybe you meant 5000 Czech Koruna?” (around 215 Dollars)
Bad Ranger: “You know what I mean, it can cost you a lot.”

In the meantime, Alex makes a Video to calm himself, not knowing if it’s a friendly conversation.

It goes on:
Lucie: “We are very sorry, we really didn’t know we were in a National Park. I hope you can turn a blind eye to our unawareness… What are we supposed to do now?”
Bad Ranger: “You have to go to the next camping site, unfortunately it’s on the other side of the lake.”
Good Ranger: “But the ferry is out of service for today.”
Bad Ranger: “You’re right, then you have to drive around the lake. That takes about two hours.”

Good Ranger and bad Ranger get back in their Dacia Duster and drive further down the road to turn around. They pass us again and roll down the window.
Bad Ranger a little friendlier: “So you don’t have to pack up everything, we allow you to stay for the night, but you have to drive back to the street and install yourselves on the side of the road.” (About 100 meters from where we are).
Lucie: “Thank you very much, we won’t do it again.” (At least not here for what it’s worth).

The night was very quiet, although we slept on the side of a small road. As it turned out later, we even managed to be on a road that is prohibited for cars. We didn’t notice any signs, because we didn’t follow the official road. That must be the reason why we weren’t disturbed by any traffic at night.

The next morning we prepare ourselves a nice breakfast. We pack up the roof top tent and cameradog Rey films the whole happening.

Ferry across the Vltava River

At the end of the Lipno Reservoir, we take the ferry across the Vltava River. The ferry runs every hour and we seem to be the only ones using it at this time direction Frymburk. Soon we arrive in the picturesque town of Frymburk and from there our overlanding trip goes on direction east, to Southern Moravia.

Along the austrian border we drive through Southern Bohemia. We pass numerous little villages like Dobrá Voda in the community of Horní Stropnice. Here we pass by the pilgrimage church of Our Lady Comforter. Dobrá Voda means “good water” in Czech. In front of the church, many people are going back and forth to fill up their canisters with good water from the fountain. That water seems to be available for the public.

Alongside the river of Thaya, we drive on a curvy road to Bítov, where one of the oldest castles of Moravia, the Bítov Castle, is located on top of a hill.

As it’s already getting dark, we start looking for a nice and quiet place to sleep, which isn’t in a National Park. In a village called Chvalatice, we find a small junction. We make sure nobody is watching us and we disappear on a dirt track. Very soon we find us a nice little place to stay overnight. No houses far and wide. We enjoy a quiet evening and a relaxing night.

Overlanding Central Bohemia in a Jeep

The next day we drive across Central Bohemia and turn into small dirt roads to see more of the beautiful landscapes. The region is thinly populated, so we have plenty of space to test our drone.

Through the River or Across the Narrow Bridge?

Our planned route leads us straight through the Bohemian Forest. To get there on the fastest way possible, we take all the possible shortcuts that lead us all across the countryside. Suddenly our road comes to an end. We stand at the bank of a muddy river. Unfortunately we can’t figure out how deep that river is and what the ground conditions are. If the ground is firm, we have no problem. If it’s muddy, we could find ourselves in the same bad situation as in Italy, where our Wrangler got stuck in the mud.

Next to the unratable depth of the river, there’s a narrow bridge that doesn’t seem to hold much more than a light weighted car. We finally decide to risk driving across the bridge, that is almost as narrow as the Jeep. The wooden planks make cracking noises as we pass and we just hope we’re not driving towards a dead end road, so we don’t have to cross that bridge again.

Napping in the Bohemian Forest

We find ourselves a nice and quiet place where we have a picnic. Alex puts up his hammock and we take a nap in the middle of the Bohemian Forest.

As the weather forecast is not very promising and there are some rain clouds moving in our direction, we continue driving to the west. After a short detour through Pilsen, one of the Czech Beer Cities, we start looking for a place to spend the night.

The weather is getting worse by the minute and so we decide to drive further direction west. After the German border, the weather is finally getting better and so we start looking for a place to park our home on wheels for the night. Soon we find a beautiful spot with a nice view. We install ourselves and make a cosy campfire.

After a damp night, we want to wait until the sun rises to dry the tent. In the meantime we have a nice breakfast.

What’s better than doing some outdoor yoga in nature? Exactly! Doing it with your dog who is showing you how to do the downward facing dog the right way!

After our tent has dried up, we pack up and head back home. See you soon Bohemia, Czech Republic and Bavaria, it was wonderful!

Like in every country, you should inform yourself on where the National Parks are and avoid camping there. We think somebody saw us when we were driving in the restricted area and reported us. We didn’t have any problems wild camping anywhere else. The country is very spacious and we rarely met any other people.

Also in Bohemia, dogs seem to be welcome. Many Czechs have dogs of their own, mainly the smaller breeds.

Same as in Slovenia, the czech supermarkets have a variety of vegan alternatives. The ingredients are listed. Of course it’s an advantage if you know some of the czech terms:
Meat = Maso
Fish = Ryba
Milk = Mléko
Egg = Vejce
Butter = Máslo
Cheese = Syr

We haven’t been to a Czech Restaurant, so we can’t tell you anything about that.